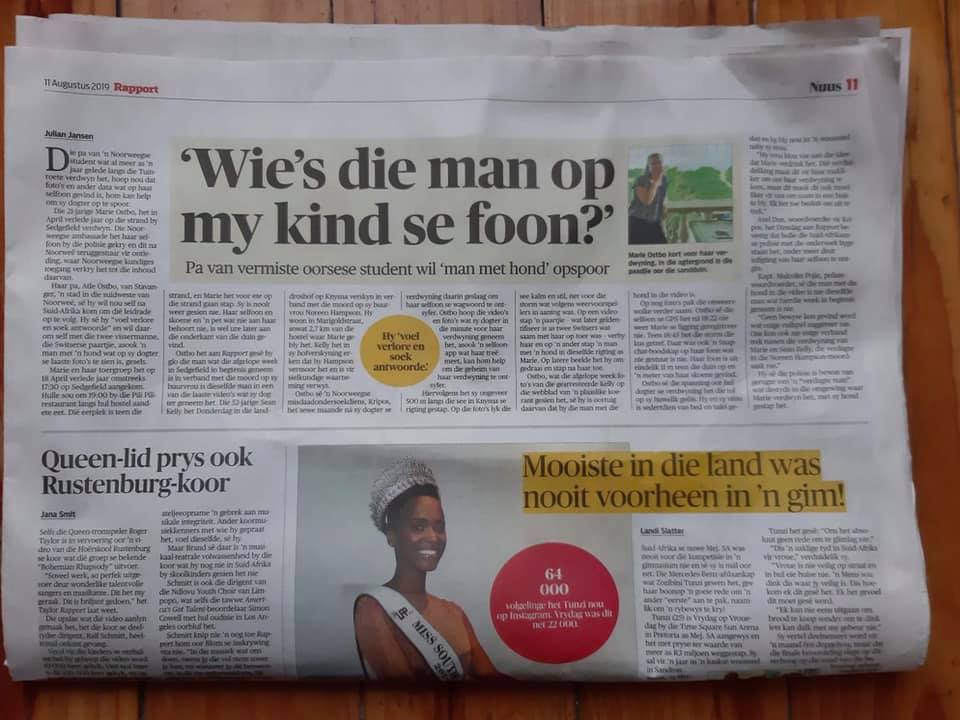 English translation of the article in RAPPORT was on print in newspaper August 11.

“I not said it directly he is the man . But there is connections:

He was observed on the CCTV cam right before Marie was going to the beach .

Marie was playing with his dog ? ( the couple from Switzerland saw that and took pictures)

Marie took video and pictures of the man with her phone

And not at Last:

What he said when police arrest him in the court.

Why did he mention her name at all?

The father of a Norwegian student who disappeared along the Garden Route more than a year ago now hopes that photos and other data found on her cellphone can help him locate his daughter.

21-year-old Marie Ostbo disappeared on the beach at Sedgefield in April last year. The Norwegian embassy got her cellphone from the police and sent it back to Norway for analysis, where Norwegian experts accessed its contents.

Her father, Atle Ostbo, from Stavanger, a city in southwest Norway, says he now wants to come to South Africa himself to follow those clues. He says he «feels lost and seeks answers» and therefore wants to talk to the two fishermen, the Swiss couple, as well as a man with a dog that can be seen in his daughter’s last photos.

Marie and her tour group arrived in Sedgefield at about 5.30pm last April. They would have dinner at the Pili Pili restaurant next to their hostel at 7 p.m. This eatery is on the beach, and Marie went for a walk on the beach before dinner. She was never seen again. Her cell phone and shoes and a hat that did not belong to her were found hours later at the bottom of the dune.

Ostbo told Rapport he believes the man arrested in Sedgefield over the past week for the murder of his neighbor is the same man in one of the last videos his daughter took. 52-year-old Sean Kelly appeared in Knysna Magistrate’s Court on Thursday in connection with the murder of his neighbor Noreen Hampson. He lives in Marigold Street, about 2.7 km from the hostel where Marie stayed. Kelly admitted in his court appearance that he killed Hampson and was referred for psychological observation.

Ostbo says a Norwegian crime investigation service, Kripos, managed to decrypt her phone’s password seven months after his daughter’s disappearance. Ostbo hopes the videos and photos his daughter took in the minutes before her disappearance, as well as a cellphone app that measures her steps, can help him decipher the mystery of her disappearance.

According to this, she walked about 500 m along the sea in Knysna’s direction. In the photos, the sea looks calm and quiet, just before the storm, according to weather forecasters. In one video, a couple – later identified as two Swiss who were on tour with her – walked past her and on another walked a man with a dog in the same direction as Marie. In later images, he turned and walked toward her.

Ostbo, who saw photos of the arrested Kelly on a local newspaper’s website last week, says he is convinced he is the man with the dog in the video.

In still photos, the thunderstorms continue to pack. Ostbo says the cellphone’s GPS did not register Marie’s location again after 18:22. By 18:45, the storm hit the coast. There was also a Snapchat message on her phone that was not sent. Her phone was eventually found 11 m up the dune and a meter from her shoes.

Ostbo says the tension over their daughter’s disappearance has taken its toll on his marriage. He and his wife have since been separated from bed and table and he now lives in an apartment near his wife.

“My wife clings to the idea that Marie was drowning. This explanation makes it easier for her to get over her disappearance, but it also makes it harder for us to stay in one house together. So I decided to move out. «

Kripos spokeswoman Axel Due confirmed to Rapport on Tuesday that they had assisted the South African police with the investigation, including by extracting information from her cellphone.

Capt. Police spokesman Malcolm Pojie says the man with the dog in the video is not the same man arrested this week.

“No evidence could be found suggesting any foul play. We also couldn’t make any connection between the disappearance of Marie and Sean Kelly, the suspect in the Noreen Hampson murder case. «

He says police are aware of rumors of a «suspicious man» who was walking with his dog in the area where Marie disappeared. 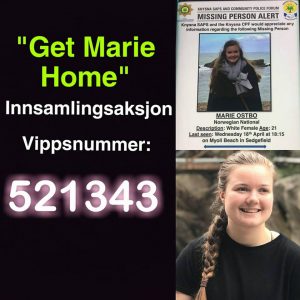 Please also give the tips to your local police. We do not have the opportunity to follow up on tips that come so far away from the country I am in. We are very grateful for tips that can help us find out what happened to Marie on April 18, 2018. 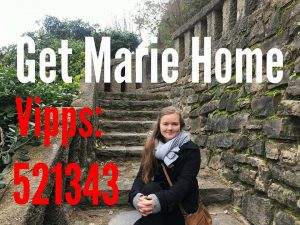 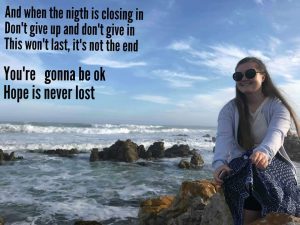